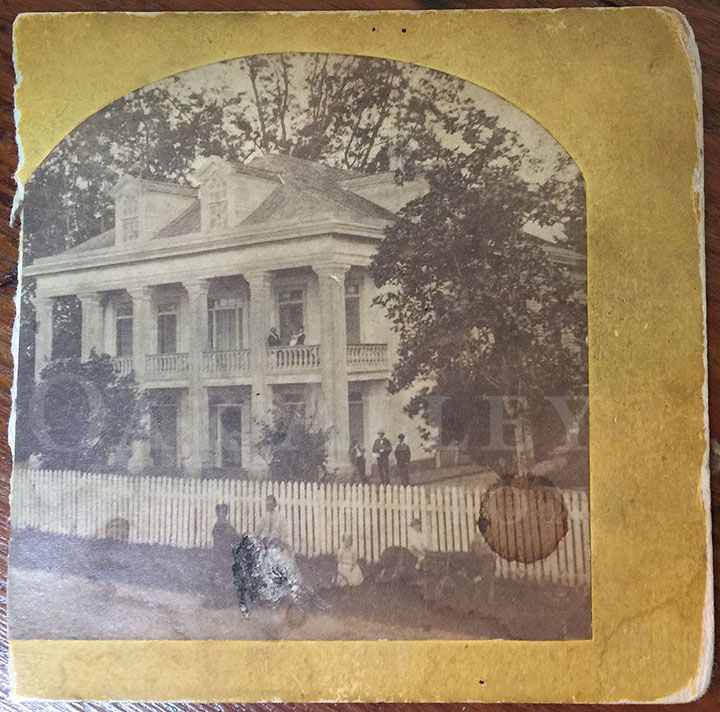 This stereograph, although only half of its original form, depicts the Cabanocey Plantation of Governor André Bienvenu Roman once located in Vacherie, Louisiana. Cloaked in both historical accuracy and myth, the concept of Cabanocey has taken many forms since its birth. Prior to 1763, Jacques Cantrelle, commander of the Cantrelle Post, owned the “Cabahonnocer” plantation, a phonetic spelling of the Choctaw word for “Mallard’s roost,” but didn’t actually make it his residence until after 1769. (Goodwin, Franks et al. 1986:17) By 1770, the first Acadians from Nova Scotia settled both banks of the river surrounding the plantation and quickly appropriated the name for the general area. Often confusing, what is known today as the town of Vacherie and Parish of St. James were at one time or another referred to as “Cabahanoce”, “Saint James of the Acadian”, the “Post of the Acadians”, “Cabanoce”, the “Coast of the Acadians”, the “Post of the Cabanoces”, and “Acadie”.

As the town around it began to grow and develop, the vagueness of the land described by the name became ever clearer as a plantation in the traditional sense.

Born March 5, 1795 in Opelousas, Louisiana, André Bienvenu Roman (A.B. for short) moved into the St. James region as a young man with his father and family. Like his younger brother Jacques Telesphore Roman, A.B. attended St. Mary College in Baltimore, Maryland. Upon return to Louisiana, A.B. held a seat in the Louisiana House of Representatives, the Louisiana gubernatorial seat (two terms), and a seat at the Louisiana Secession Convention, among others. He was credited for the creation of Jefferson College and the College of Franklin. Although he spent a large portion of his time in New Orleans, it was in St. James that A.B. owned the former plantation of Jacques Cantrelle where he raised five children, and at least two grandchildren, alongside his wife, Franҫoise Aimée Parent. The Louisiana governor died January 27, 1866 in New Orleans of an aneurism.

The stereograph format was a two part system. Through the use of a stereo viewer, think of the View-Master for kids from the ‘90’s, the stereogram depicted a three-dimensional scene. When viewed in the naked form, the stereogram was two silver gelatin prints, side-by-side, on a rectangular piece of cardboard. Between the date of creation and the Oak Alley Foundation ownership, this stereograph was torn in two. Today, only half remains, but we are still able to see a clear depiction of the main house of what was known as Cabanocey Plantation during a later ownership in the late 1800s.