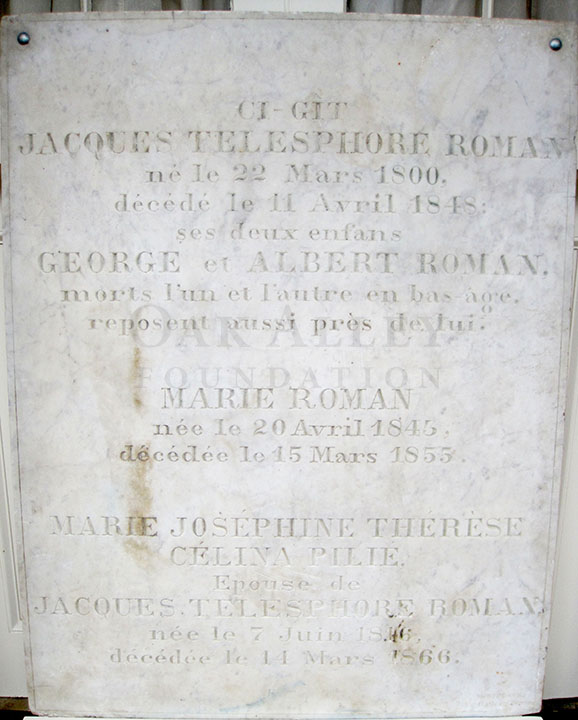 On April 11, 1848, Jacques Telesphore Roman, first owner of Oak Alley Plantation, died. His body was laid to rest in a family tomb just up river from his plantation in the St. James Catholic Cemetery.  His wife survived him by an additional eighteen years, during which time she relocated his body to a new family tomb located in St. Louis Cemetery Number Three in New Orleans, Louisiana. On March 14, 1866, she followed her husband into the grave. Not long after, their daughter Louise Therese Roman joined the devout Catholic order of Discalced Carmelites in St. Louis, Missouri. Later, she helped to establish the first order in New Orleans.

As was the French tradition, the convent was built with crypts beneath to house the deceased sisters. However, due to the water level, the city refused to allow the burials “below ground”. Seeking an alternate solution, Louise was granted the permission to give her family’s tomb to the nuns. The original tombstone was removed and a new one added. In memory of her parents, Louise had their tombstone saved. It was placed face down beneath a statue of the Madonna inside of the convent and remained with the nuns. By the mid-1990’s, however, the story of the tombstone had been forgotten.

As the nuns made their final move to their present day location in Covington, Louisiana, a former sister, and Roman descendant, returned to help. During the process, she noticed the forgotten names. Due to the slabs downward position, the surface had been pristinely preserved, allowing for a perfect example of a 19th century tombstone. On the reverse, a clearly marked circle mirrors the base shape of the statue.

Carved in French, a translation of the tombstone reads:

George and Albert Roman | In death one and the other | Also lie in peace close with him.

Though the names were removed, the bodies of all but two of their six children remain buried in the St. Louis tomb today. Surrounding the tomb are stones listing each of the Carmelite sisters that have perished since the first one in May of 1894. On the side of the tomb, the second name down reads Mother Teresa of Jesus | Died July 19, 1895, the religious name taken by Louise Roman upon receiving her Holy Orders.

In 2011, the tombstone was placed on display at Oak Alley Plantation and can be found at the “Big House” exhibit.