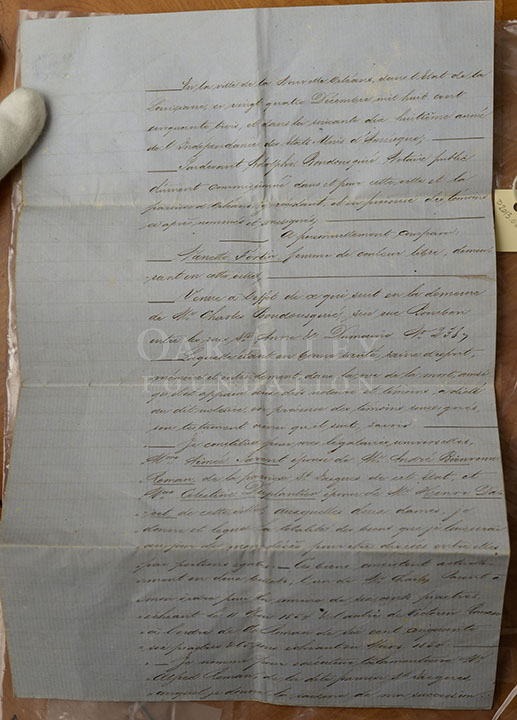 Born into slavery, Nanette spent the majority of her life being responsible for the personal effects of her owners, however, this is not how she died.  Before her death, Nanette had two paper based documents created that would lead future generations to many different observations. Among those two items, which are both on display in the “Big House” exhibit, is her last will and testament.
While enslaved, it was illegal for Nanette to legally own personal goods, however, after her emancipation, this changed. While it is unknown exactly what her personal effects were, she drafted this will dictating who should receive those effects and who would handle her affairs of estate. What is strange is that it was her former owners that she choose as her beneficiaries, Celeste Duplantier Daret and Franҫoise Aimée Parent Roman. Jeanne’s brother Alfred Roman, was chosen as the executor. Being illiterate, Nanette was forced to trust those around her in the honesty of the will. Regardless of the details, the simple existence of this document shows the hard fight and transition of a woman born into slavery but died as a free woman worth being remembered.

ReDiscover Oak Alley is an initiative which seeks to better share the significance of an iconic historic site. It aims to redefine the...
Read More