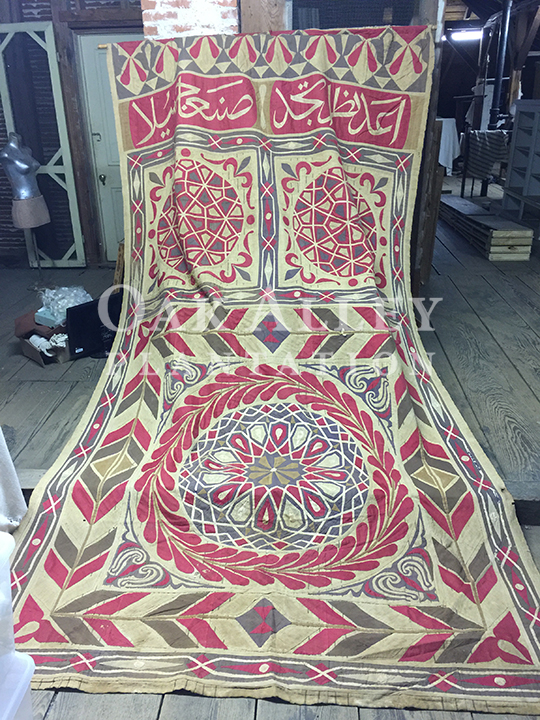 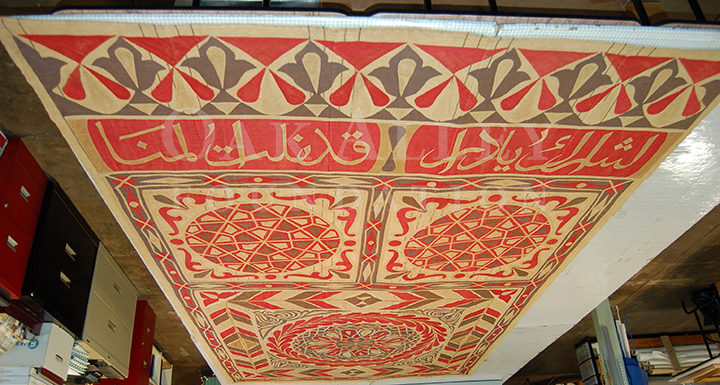 The word Khayamiya, a type of needle-turned cotton appliquéfound in Cairo, Egypt, is derived from the Arabic term khyam, meaning tent.Khedival references the period between 1867 and 1914 and helps to clarify the type of khayamiyain question.The art of the khayamiyacan be traced back to the Ottoman Turks.

Dr. Sam Bowker and Seif el Rashidi, authors of the book Tentmakers of Cairo published October 2018,graciously provided information about this unique art form and the specific panels in this collection. Due to the duplicity in construction, design, and color, it is highly likely that the two panels in the Oak Alley Foundation (OAF) collection were created by the same artisan but still intended for each to be a standalone item. Fitting khayamiya traditions, the panels showcase the typical Islamic ornamental models and architecture. Again fitting traditions, both panels host a line of Arabic text, the only difference between the two. The epigrams are a bit odd and this could be attributed to the literacy of the artisans as well as the possibility of the epigrams being taken from song lyrics of the folkloric mawaal genre. While doing research for their book, Bowker and el Rashidi created something they’ve nicknamed The Khayaymiya Poem. The OAF panels fit into the following two poems.

In Egypt, the beauties of every art | To reveal them, I need long explanation | Look again, you will see a beautiful work And behold I have shown you the proof

With your bounty oh house, I have attained my dreams |With happiness and joy, sadness/suffering has been eliminated

Singular panels, such as these two, are also known as tarkand were used as awnings, curtains, screens, etc. Today, the historic and beautiful art form is still practiced in the streets of Cairo by the hands of artisans who learned their trade from their fathers before them. They can be found on Shāri al-Khiyāmiyya, the Street of the Tentmakers, one of Cairo’s few covered streets.

The last private owners of the plantation, Mr. Andrew and Mrs. Josephine Armstrong Stewart, are the reason these historic panels are in the OAF collection today. On January 24, 1923, the couple left the port of New Orleans to begin a five month cruise that including destinations such as Madeira, Gibraltar, Egypt, Algeria, Italy, India, the Straits Settlement (British East Indies), the Dutch East Indies, French Indo-China, Ceylon, Hong Kong, China, and Japan. On April 28, 1923, the ship departed Yokohama, Japan and arrived at the port of New York just over a month later. From their travels aboard their cruise, other “souvenirs” were returned with them, subsequently entering the OAF collection. Items such as a bone and bamboo mahjong set from China were brought back with them. Not to mention, nearly three hundred stereographs depicting images of world known sights such as the pyramids of Giza, Buddhist temples, and the Great Wall of China.