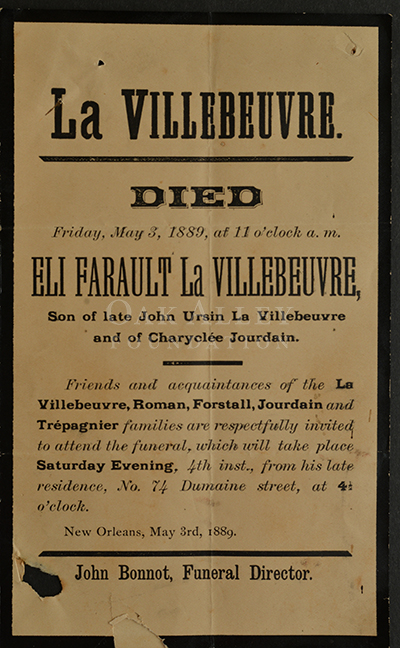 Death announcements and obituaries in the 19th century varied greatly. Often over the top flowery in speech and description, obituaries were a place that marked in great detail a person’s life story. Often adding details about their childhood, who their families were, where they attended school, what their careers were, and even their ultimate demise. At the other end of the gamut were death announcements that simply marked a person’s passing in relatively short, non-descriptive ways. Often obituaries, announcements, and notices were printed in local newspapers and numbered by the dozens, but notices could also be found posted around town as standalone leaflets. The announcement described here was a printed display that was meant to be posted in various locations. Very simple and direct in its motives, the document reads:

The notice is simple in design, hosting multiple typefaces, a black edging with black ink on a tan background. The notice is folded in half and hosts several holes, some resulting from damage in the subsequent years following its public display. A crease is evident extending from the top of the document to the bottom and slightly off centered to the left.  Eli’s wife, Jeanne Aimee Roman, also had a similar notice published upon her death later in July of the same year.