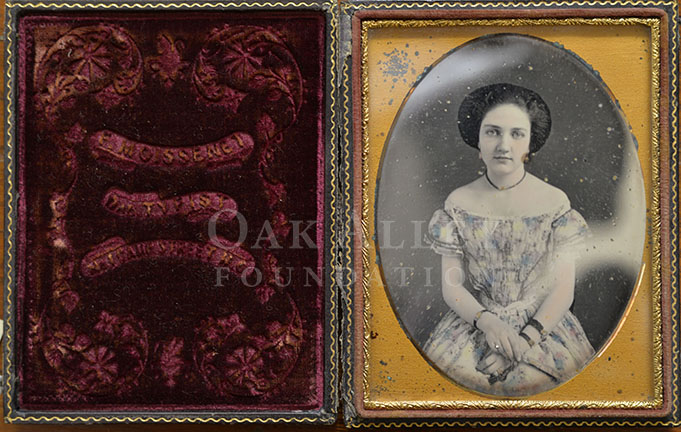 Jeanne Aimée Roman was born May 25, 1818 to Governor André Bienvenu Roman and Françoise Aimée Parent. In 1852, Jeanne married Eli Farault de LaVillebeuve, son of another wealthy and prominent family. The daguerreotype that we study here has a matching twin showcasing her husband Eli. After the death of her sister, Jeanne’s nieces moved in with their grandparents Roman creating a close bond between nieces and aunt. During the Civil War, it was Jeanne and Eli’s house on Dumaine Street in New Orleans that became the “safe haven” for Jeanne’s nieces, parents, and other family members. Husband to one of Jeanne’s nieces was her cousin, Henri Roman, son of Jacques Telesphore Roman, original owner of Oak Alley Plantation. Keeping the tradition of marrying cousins alive, Jeanne’s son Charles married Jacques Telesphore’s granddaughter, Marie Buchanan. Jeanne died in July 1889.

Felix Moissenet was born in France circa 1814 and entered the photographic profession in 1843. Directories for New Orleans listed Moissenet in various locations ranging from Royal, Camp, and Broadway Streets between the years 1849 and 1861. Taking a short break from New Orleans, Felix spent 1853-1854 in New York City. His advertisements described his use of watercolor and oil paints to color his photographs.  That same technique can be seen here in his daguerreotype of Jeanne. Moissenet hand colored the details of Jeanne’s dress, necklace, and other jewelry by adding blues, yellows, golds, and pinks.

Visitors can extend their visit to the area and experience more of the River Region. Local restaurants offer cajun/creole cuisine, another...
Read More