Oak Alley Plantation's historic grounds & exhibits will temporarily close through April 12, 2020 at which time we will re-evaluate the COVID-19 situation. 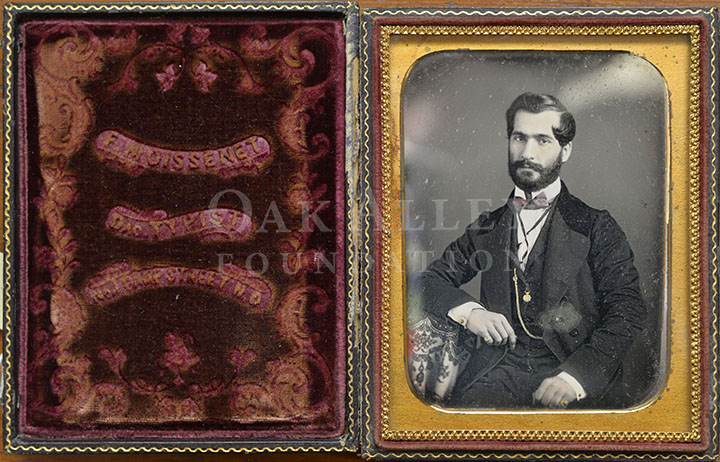 Eli Farault de LaVillebeuvre was born the second child of five on October 29, 1829 to Jean Ursin de LaVillebevure and Elisabeth Chariclee Jourdain. Similar to the Roman family, the de LaVillebeuvres were also extensive, wealthy, and socially prominent. Unlike many of their social class, however, they had investments outside of the American Slave Trade which allowed them to retain much of their wealth after the start of the American Civil War. Eli married into the Roman family in 1852 by marrying Jeanne Aimée Roman, daughter of Governor André Bienvenu Roman. Though eleven years his elder, together they produced three children. Their son, Charles, married his cousin, Marie Buchanan, granddaughter to Jacques Telesphore Roman, original owner of Oak Alley Foundation. On May 3, 1889 Eli passed away.

Felix Moissenet was born in France circa 1814 and entered the photographic profession in 1843. Directories for New Orleans listed Moissenet in various locations ranging from Royal, Camp, and Broadway Streets between the years 1849 and 1861. Taking a short break from New Orleans, Felix spent 1853 and 1854 in New York City. His advertisements described his use of watercolor and oil paints to color his photographs.  That same technique can be seen here in his daguerreotype of Eli. Moissenet hand colored the details of Eli’s tie, cuff links, rings, and other jewelry. His jacket is very fashionable for the time, as is Eli’s wife’s, Jeanne’s, apparel in her matching daguerreotype. Under his right arm drapes what appears to be a silk and velvet cloth with a beautiful paisley design. The photograph rests inside of a wooden case with a glass protectant. On the opposite side of the case, is a velvet inlay that hosts Moissenet’s name, profession, and address: “F. Moissenet | Dao. Typist | No. 1 Camp Street N.O.”