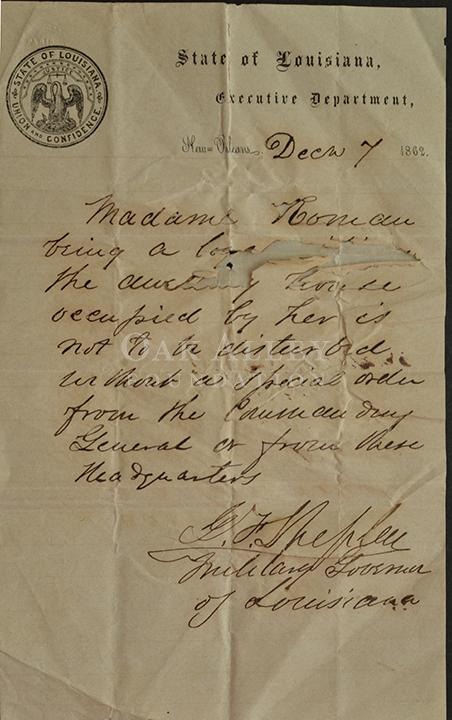 Letter is embossed with a seal from Paris

The state seal is stamped in the upper, proper left corner

This object contains two calling cards, two letters, and an envelope. The first letter is written from Jeanne R. LaVillebeuvre to her mother, Francoise Aimee Parent Roman. It is informal and very typical of what one would expect to see exchanged between a mother and daughter, family gossip. Despite the person being discussed, the main topic circulates around illness. Both Jeanne and her mother Aimee appear to have been kept separated due to their various illnesses, no explanations as to exact ailments. The death of a former enslaved nanny, Nanette, is discussed, especially her illness leading up to her passing. Jeanne discusses Nanette’s death after “…a great constipation…” and “…Mr. Daret, knowing her illness to be incurable…”. Today, we know Nanette as Nanette Fortin, a family surname she acquired, presumably, upon her emancipation. She bore this name in a lithographic print she sat for and her Last Will and Testament, both on display inside Oak Alley Plantation’s main house.

The envelope is labeled to Madame A.B. Roman, Parish of St. James at the Cantrelle Post Office with three U.S. postage stamps and a postmark stamped, “June 12 New Orleans, La..” The calling cards are duplicates that have “A.B. Roman” printed and centered on each.

The last letter is written by Military Governor George Foster Shepley and is transcribed below. This last letter can be seen on display in the same exhibit as Nanette’s above mentioned Will and print.

Madam Roman being a loyal citizen, the ____ house occupied by her is not to be disturbed without a special order from the commanding general or from these headquarters.

On April 25, 1862, just a year after the start of the Civil War, the port of New Orleans and a major component of the Confederacy fell to the Union. By taking this particular port city, the Union not only gained control of all imports and exports from the central United States, but also effectively cut the South in half affecting a major blow. Residents who signed an Oath of Allegiance to the Union were granted this reprieve promising that their homes were to be forsaken in exchange. We have been unable to locate “Madam Roman’s”, aka Francoise Aimee Parent Roman’s, signed Oath but this letter verifies that she did pledge that allegiance. The Union would continue to control New Orleans until the end of the war. General George Shepley controlled the office of Military Governor from June 1862 until March 1864 and worked as an aid to both General Butler and General Banks. Sentiments regarding the war varied greatly, even within the Roman family.