Certificate of Appointment- Administer to the University of Louisiana 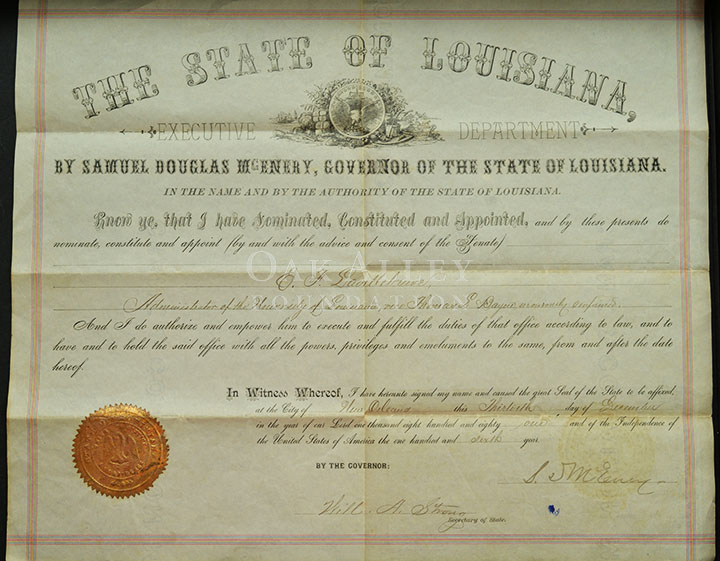 Certificate of Appointment- Administer to the University of Louisiana

William A. Strong, Secretary of State

The certificate seen here signed by Governor Samuel McEnery (bottom, proper left) and Secretary William Strong (bottom, center) declared and empowered Eli Farault de LaVillebeuvre to fulfill the duties of office for the position of Administrator to the University of Louisiana. LaVillebeuvre held this office for a total of four years before Alfred Roman, his brother-in-law, took over. The document is embossed with a gold seal in the lower, proper left corner and stamped with the official seal of Louisiana, the state bird, a pelican, seated, wings open, on a nest encircled by the words “Pride, Justice, and Confidence”, followed by a second circle reading “State of Louisiana”. The document is quite large measuring in at 16.7 inches wide by 13.7 inches long. It is made of a light material, making the document rather thin. It is ornately detailed hosting a border of thin red, blue, and yellow stripes, calligraphic writing, and the seal for the governor at the top center.

Today, Tulane University is considered a top school located in New Orleans, Louisiana, but the school, dating back to 1834, did not begin under that name. Created in an attempt to solve the city’s malaria, smallpox, and yellow fever epidemics, the Medical College of Louisiana was formed. By 1847, the college became a public institution as the University of Louisiana and remained as such until 1884, when Paul Tulane donated over one million dollars to the school, thus creating the world known Tulane Unversity. Two years later, the H. Sophie Newcomb Memorial College was established as the female co-ordinate college.

Eli Farault de LaVillebeuvre was born the second child of five on October 29, 1829 to Jean Ursin de LaVillebeuvre and Elisabeth Chariclee Jourdain. Similar to the Roman family, the de LaVillebeuvres were also extensive, wealthy, and socially prominent. Unlike many of their social classe, however, they had investments outside of the American Slave Trade which allowed them to retain much of their wealth after the start of the American Civil War. Eli married into the Roman family in 1852 iby marrying Jeanne Aimée Roman, daughter of Governor André Bienvenu Roman. Though eleven years his elder, together they produced three children. Their son, Charles, married his cousin, Marie Buchanan, granddaughter to Jacques Telesphor Roman, original owner of Oak Alley Foundation. On May 3, 1889, Eli passed away.