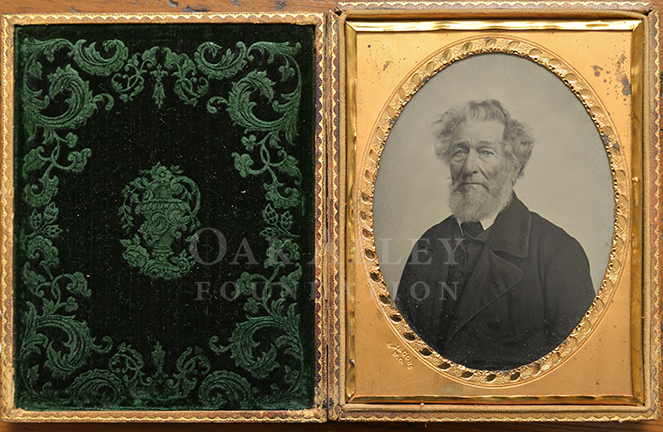 Frame is embossed on the obverse with photographer’s name and location: “E. Jacobs | N.O”

Often signing his name as “A.B. Roman”, Andre Bienvenu Roman, was born March 27, 1795 to Jacques Etienne and Louise Patin Roman in St. Landry Parish.  He was the ninth child in a sequence of thirteen and brother of Jacques Telesphore Roman.  On July 20, 1816, at the age of 21 and at his home in St. James Parish, Andre Bienvenu married Francoise Aimee Parent. The two then produced a total of five children, three boys and two girls. Having served two gubernatorial terms between the years of 1831 and 1843, A.B. quickly became one of many powerful Roman children through the creation of a prolific political career.  With a plantation in St. James Parish and a political career in the city, Governor Roman often split his time between the country and New Orleans, Louisiana.

In this photo, A.B. is seen in his later years wearing a black jacket, vest, and tie atop a white shirt, posed before a plain white background. Despite his body being turned to forty- five degree angle to the camera, his head more directly faces forward allowing him to look directly back at his viewers. A bit of blush is seen in his cheeks, adding color to this otherwise black and white image in the manner of hand-tinting. His portrait is placed inside of a brass frame with an oval opening that has been embossed with a design that is followed directly beneath by the artist’s name and city. This frame sits inside of a snug, wooden box that is wrapped with a leather exterior and green velvet interior. The ambrotype (a glass plate that was  coated with a wet, light sensitive substance in which a negative image was then exposed) quickly over took its predecessor, the daguerreotype, due to the fact that it was cheaper and quicker to produce, produced a finer degree of detail in the image, and didn’t have the same mirror-like reflective surface. By the 1860s however, this method was quickly being replaced by the tintype, yet another metal based process like the daguerreotype. Governor Roman did not see past that time, though, as death claimed him on June 27, 1866, at the age of 71, just outside of his grandson’s home in New Orleans.